What I Have Been Doing

All those flowers that Marilyn bought in May had to be planted and tended, so I have been busy with that. The thing I miss most about not having a house is working in the garden, so this is a pleasure for me. In front of the resort is a large area rocked-in area for flowers.

At the top level is a decorative "Pumpkin Patch" sign. This year it sort of got covered by flowers, but everyone seems to like the arrangement. 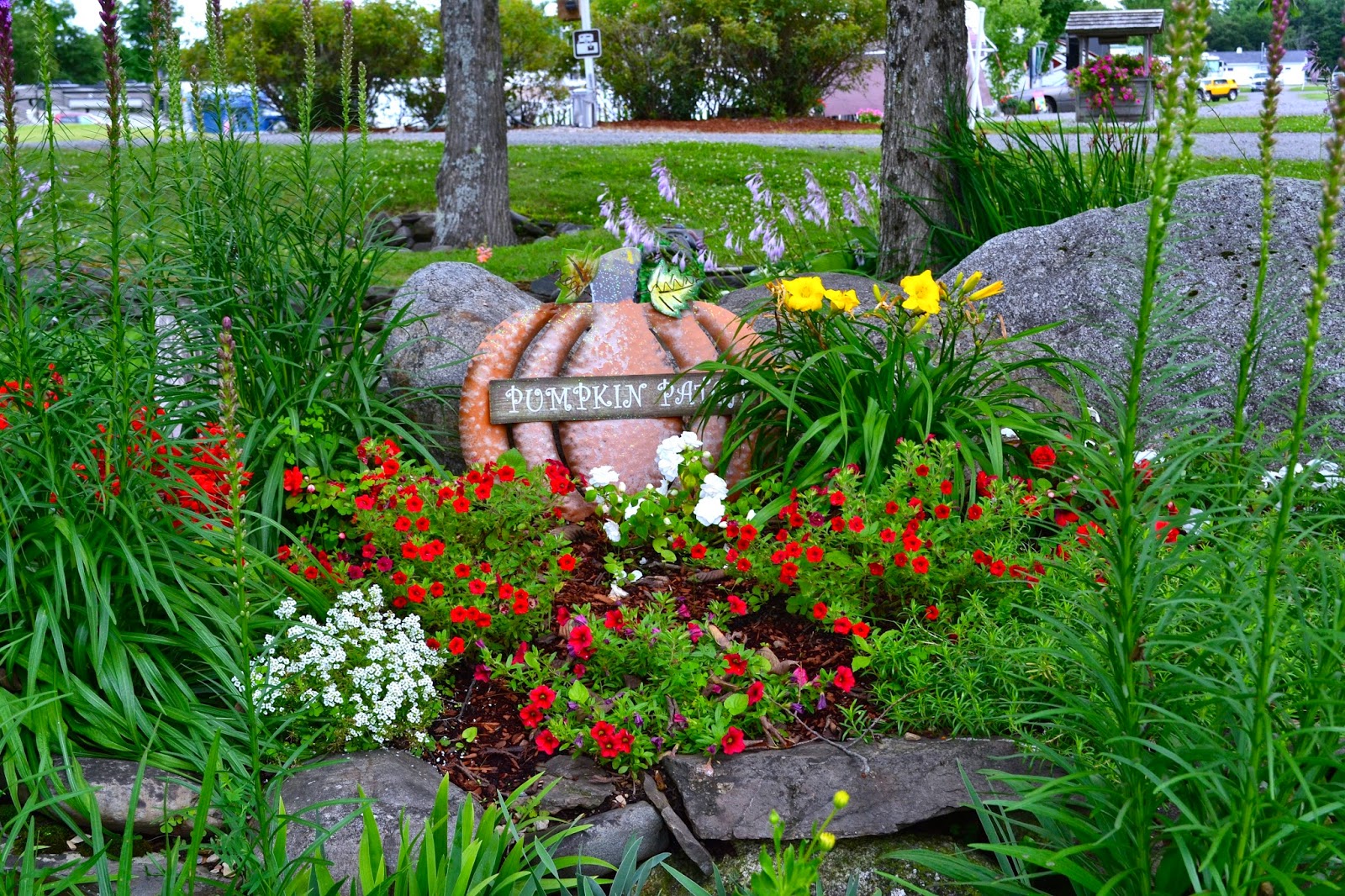 The rocks divide the area into several sections, so I planted each section differently - red and white on the top level, purple (Marilyn's favorite) in the middle level, and each of the lower level sections with a different color scheme. My favorite section is the one I planted in flowers that are striped in pink and white, like peppermints. Each section has a little bit of white, to make the colors pop. Some flowers have already faded by now but there is always something else blooming. Behind this area is a long rock wall decorated with blooming hostas, interspersed with flowers to create bright spots of color. Near the driveway they have an old manure-spreader parked. I kept calling it a wagon and someone would always correct me - "that's a manure-spreader". Personally I prefer to call it a wagon! Regardless, it dresses up nicely with big baskets of flowers, vines, and a couple of fake Canadian geese (which is the best kind of Canadian geese).

Since the name of the Resort is Pumpkin Patch, they like some orange spots. Marigolds are a strong orange color, so I rocked in a small area near the driveway for those.

They alway want wave petunias in the flower boxes under the office windows, and this year they grew extra well. 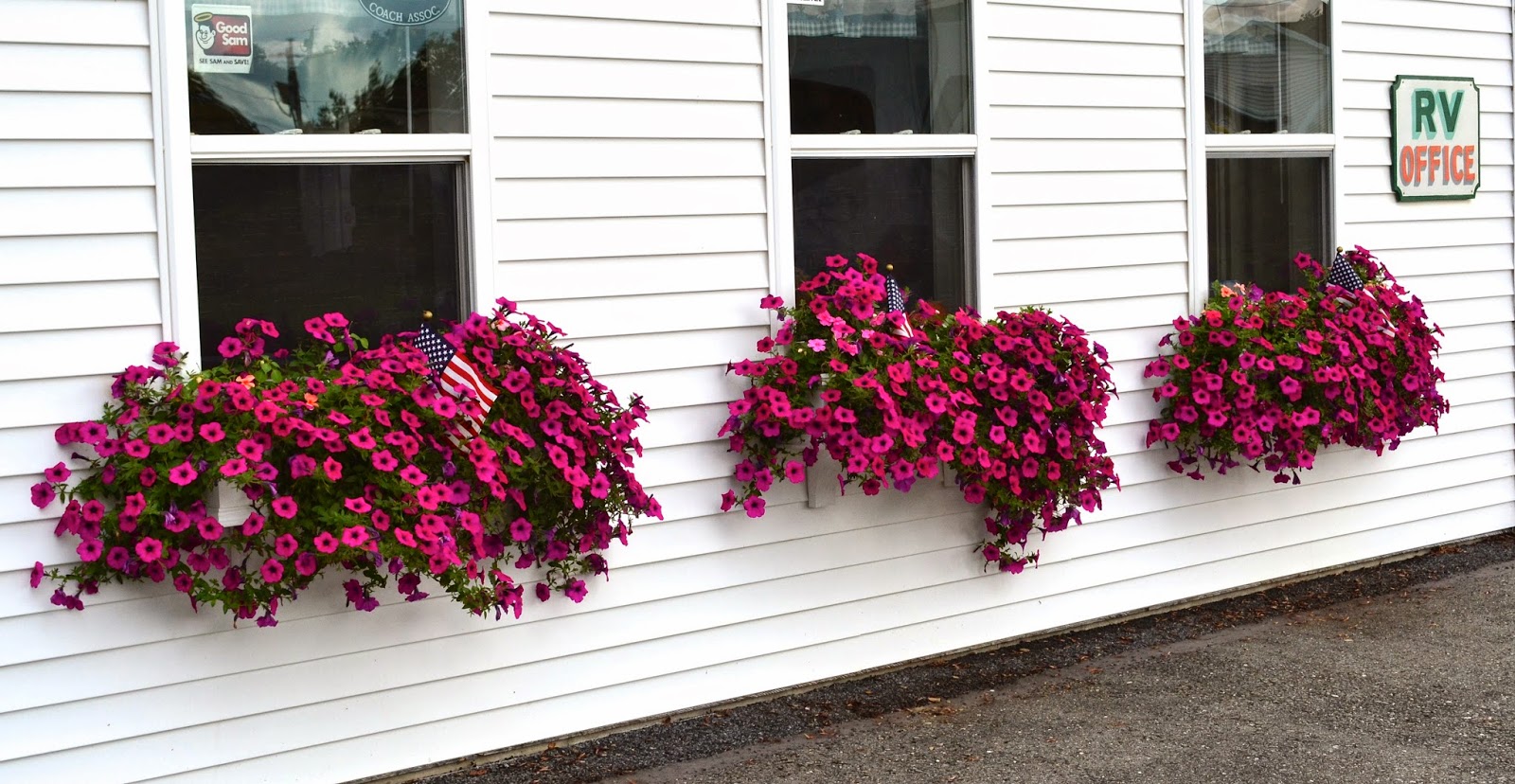 Most of the flowers she bought this year are annuals so they will not come back next year. The husband of the wife-and-husband team who own the resort thought it would be a good idea to put in something that would come back next year. So near the first parking site I rocked in an area for some perennials and Marilyn picked out some pretty ones she liked. They were put in a little late this year but they are growing well, so next year they should be showier. 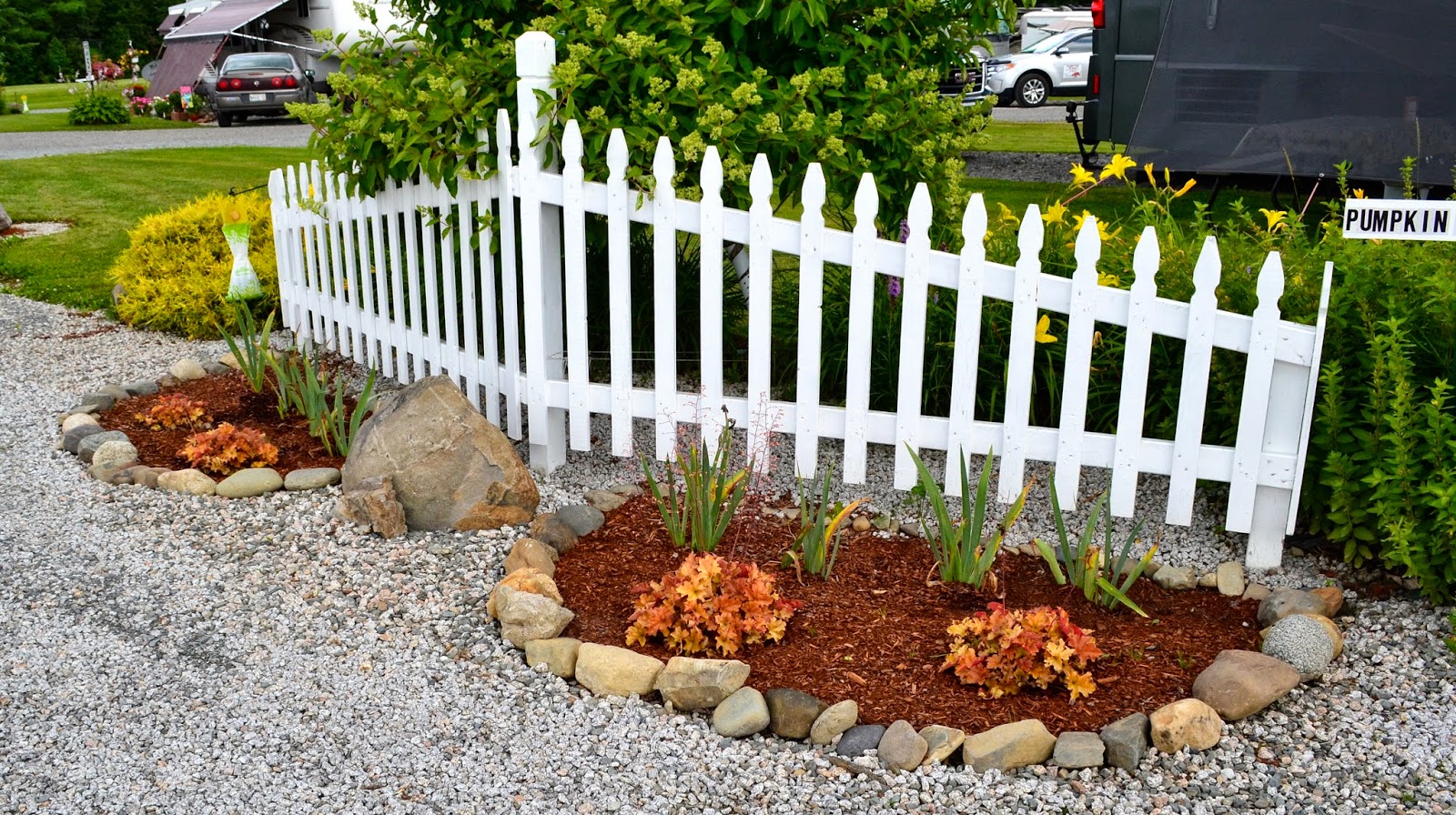 In the back of the resort I found an old fashioned well pump. I thought it looked pretty cool and asked if we could put it in the resort. It turns out this pump has sentimental value to the owners, so they were very happy to have it displayed. It sits on a wooden stand which I suggested we turn into a planter, but they wanted to see it decorated like a well. So I painted the pump, painted the stand blue (which was as close to water as I could get with the supplies available), built a short rock wall around the stand and tucked in a few little plants. It's not quite what I wanted, but it's so much better than having the pump hide behind the shed! 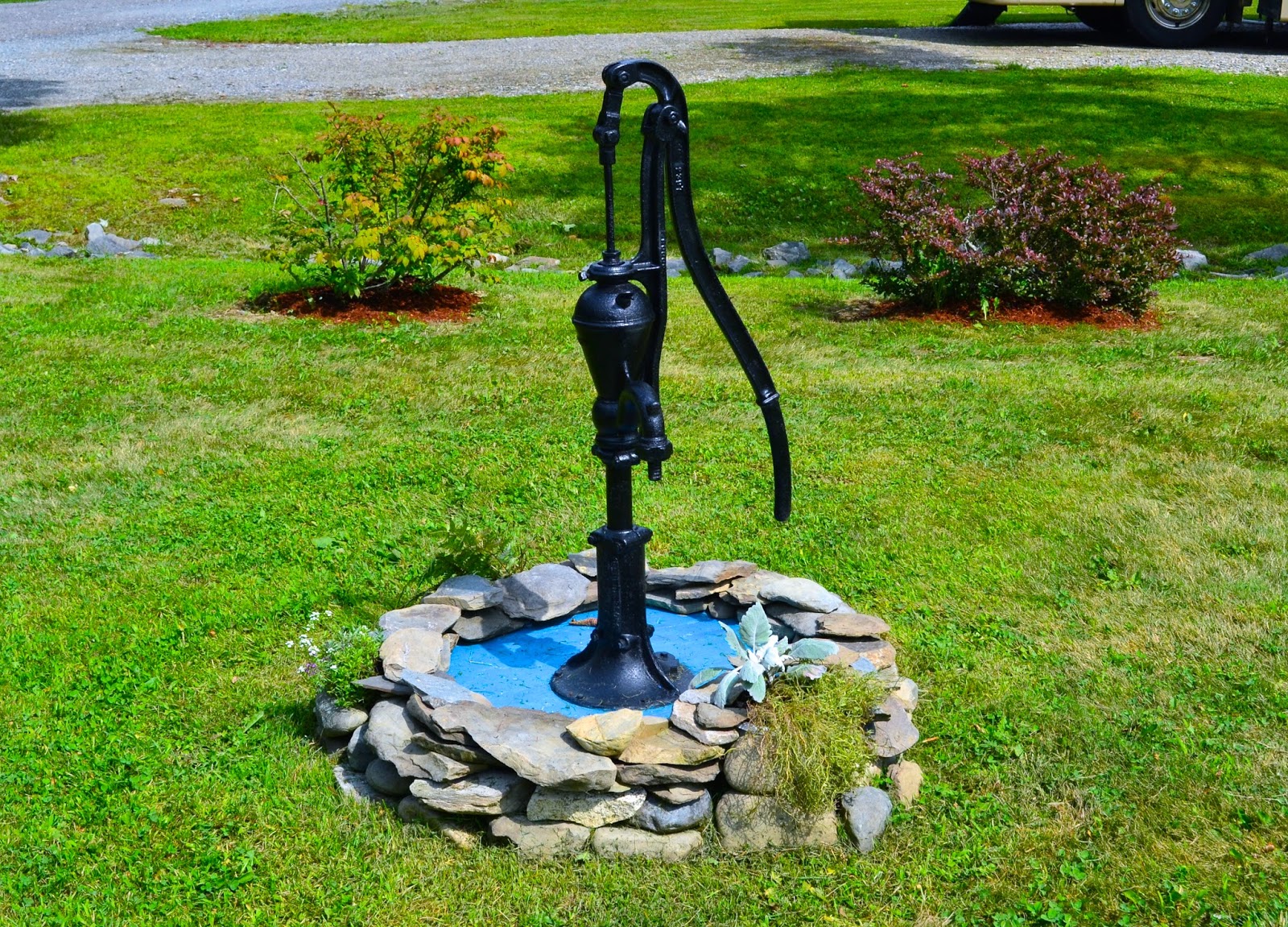 There is a husband and wife team (Fai and Nancy) who work here every year; they are good friends with the owners and have worked side-by-side with them to create the resort. A few years ago the owners decided to create something special on a big patch of grass and call it Fai Park, in honor of all sweat and labor that Fai has put into the resort. They had plans drawn up and a nice hydrangea tree planted, but nothing else happened for several years. This year they asked me what I thought. I came up with a different design and they let me create it.

I planted long row of roses to separate the park from nearby parking sites. On the other side of the park I planted peonies and hydrangeas, spaced apart so the big mowers can get around them. One corner will hold an arch (when they get or build one) with climbing flowers. Last year someone planted spreading ground cover and tall flowers under the hydrangea tree, so I worked around those, planting bright sections of red, purple, white, yellow and orange. Across from where the arch will stand I wanted to do something for the birds. We cannot put up bird feeders because they attract destructive squirrels. So I suggested a birdhouse area, planted with sedum. One one side of the birdhouse we put in a birdbath, and on the other side I built a Fairy house. 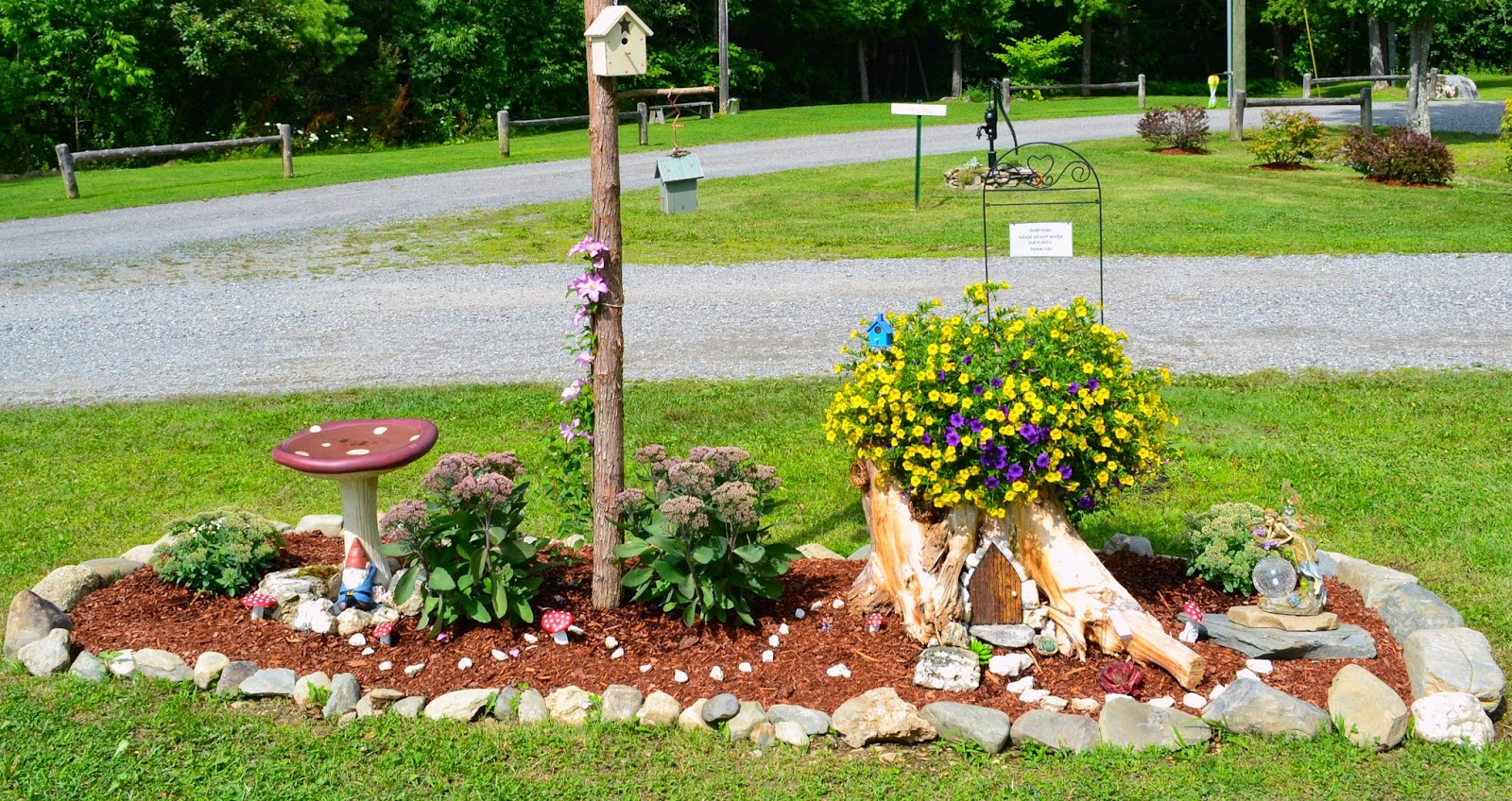 The birdbath has a little gnome resting under it. I created some rock toadstools to match the birdbath and a little white granite path that goes across the mulch to the other side... 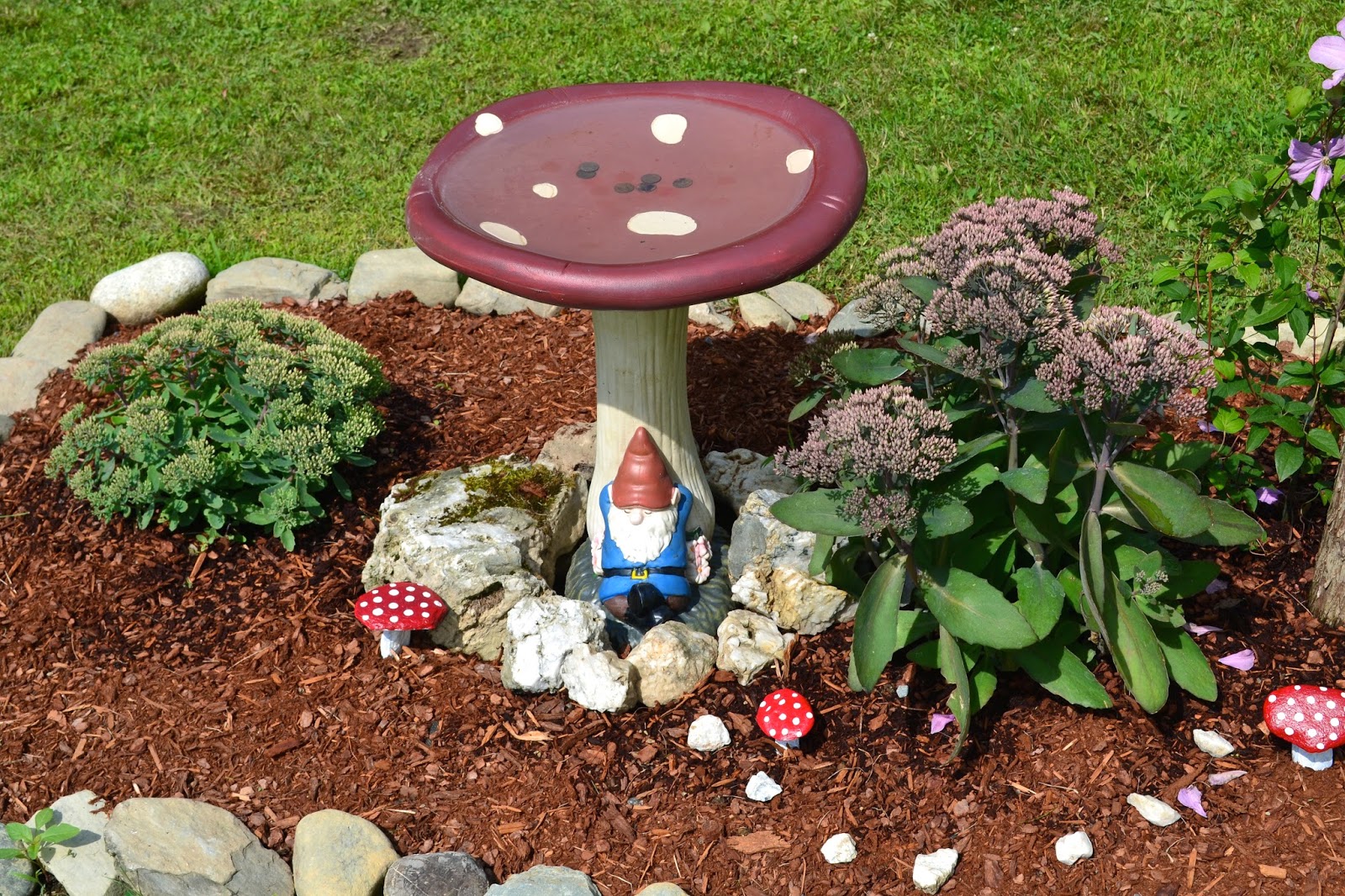 in case he wants to visit the Fairy house! Fai found an old stump for me to use for this. I stripped the bark and thought the wood was so pretty that I didn't want it to weather into grey, so I put a sealant on it. Then I created a little wooden door with a faux-pearl doorknob and a threshold of smooth grey granite. I picked enough white granite chips out of the road to fill in around the door and create paths to the the birdbath and to the outdoor patio, where a fairy rests on her gazing globe. A planter on top of the stump holds a big basket. 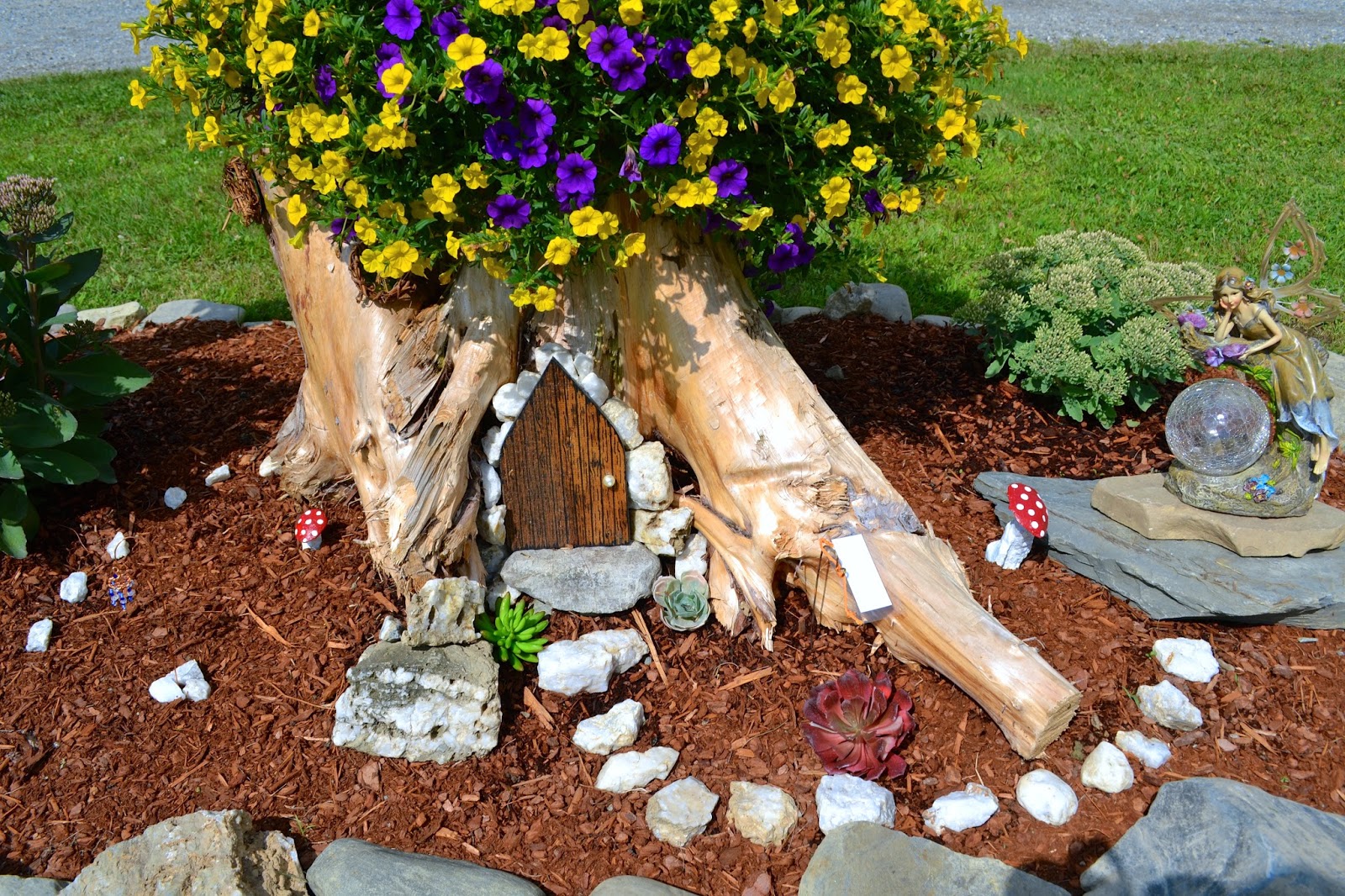 Most of this is perennial, which makes Jim happy; just the flowers on the fairy house and under the hydrangea tree will need to be replaced next year. Several people, guests and staff, say this is the best that the Resort has ever looked!